“Smartphones, tablets and e-readers should have an automatic ‘bedtime mode’ that stops them disrupting people’s sleep,” BBC News reports.

The concern is the devices emit short-wavelength blue light, which may disrupt the production of melatonin, a hormone that helps us sleep.

The news comes from a study that examined the short-wavelength blue light emissions produced by three commonly used devices:

Previous research suggested the blue light these devices emit can have a disruptive effect on the sleep hormone melatonin when they are used around bedtime.

This study confirmed the three devices do produce this light, with text producing slightly more intense light levels than the popular Angry Birds game. It also found special orange safety glasses filter out some of the blue light, and a sleep app for children produces less blue light. The researchers suggest the design of future devices and apps could be adapted to limit the colour palate at night.

But this wasn’t an experimental study in people. The study didn’t examine whether using these devices before sleep had a significant effect on sleep quality and duration.

Still, most sleep specialists stress the importance of good sleep hygiene – adopting a regular pattern in the evening that helps both body and mind wind down and relax ahead of sleep. 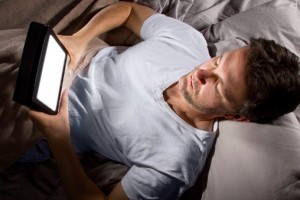 Where did the story come from?

The study was carried out by researchers from Evelina London Children’s Hospital sleep medicine department, King’s College London and the University of Surrey, and received no sources of external funding.

It was published in the peer-reviewed medical journal Frontiers in Public Health on an open-access basis, so it is free to access online.

The UK media’s reporting could have benefited from making it clearer that this research didn’t actually prove these devices disrupt sleep.

No people were involved in this study, which only measured the light the devices produce. In particular, it is unclear where the Daily Mail’s “extra hour’s sleep” suggestion comes from.

Also, The Daily Telegraph’s slant towards children may suggest this study involved them. It only examined light from the “Angry Birds” game, which is popular with both children and adults (including, apparently, Prime Minister David Cameron).

What kind of research was this?

The researchers say there is growing evidence to suggest using light-emitting (LE) devices in the evening may have an adverse effect on sleep quality, duration and daytime performance. Behind the Headlines discussed similar research earlier this year, as well as in 2013.

It is said the brightness, colours and patterns of these devices may influence our body rhythms, particularly when used before bed. Light and brightness during the day has a positive effect on alertness, function and mood, but at night this can impair the production of the sleep hormone melatonin, and so affect sleep.

In particular, short-wavelength blue light is believed to have the most disruptive effect on melatonin. This study aimed to measure the blue light produced by three popular LE devices – a tablet, smartphone and e-reader – allowing comparison by activity type.

What did the research involve?

The researchers selected the three most popular tablet, smartphone and e-reader devices according to sales data – the iPad Air, iPhone 5s and Kindle Paperwhite first generation, respectively. All of these devices are said to be easily viewed in darkness without additional room lighting (“backlighting”).

The tests were therefore carried out in a dark room. Screen brightness for the tablet and smartphone were not altered from automatic settings, but the e-reader was reduced to 50% in accordance with user feedback.

An optical spectrometer – a device that can measure the frequency and wavelength of light – was used to measure light levels while displaying text on all devices, and then the game Angry Birds on the smartphone and tablet.

The researchers also looked at the effect of two devices designed to reduce light disruption:

What were the basic results?

The results are fairly complex, listing the spectral distribution of the devices as calculated into equivalent “α-opic” – illuminance of the different photo pigments on the retina of the eye.

How did the researchers interpret the results?

The researchers concluded that all the LE devices they tested produced short-wavelength enriched emissions. They went on to say that, “Since this type of light is likely to cause the most disruption to sleep as it most effectively suppresses melatonin and increases alertness, there needs to be the recognition that at night-time ‘brighter and bluer’ is not synonymous with ‘better’.”

They suggest future software designs are better optimised when night-time use is anticipated, saying devices could have an automatic “bedtime mode” that shifts blue and green light emissions to yellow and red, as well as reduce backlight and light intensity.

The study demonstrates the devices do produce this light, which previous research suggested can have a disruptive effect on the sleep hormone melatonin. The research also found less blue light passes through special orange safety glasses, and a sleep app for children produces less blue light.

Little more can be said about the results of this study. Despite the media headlines, the study does not show these light-emitting devices disrupt our sleep or alter our melatonin levels.

This was not a sleep study where, for example, the researchers measured participants’ sleep duration and quality when they did or did not use these devices before sleep.

There are also many other questions readers of these news headlines may have, such as:

For a couple of these, the study has leant on previous research and recommendations to give some answers.

The researchers say Harvard Medical School suggests avoiding blue light two to three hours before going to bed, while the National Sleep Foundation suggests turning all electronic devices off at least an hour before bed. The researchers also suggest parents can easily remove devices from the bedrooms of young children or turn them off before they go to bed.

As the researchers rightly acknowledge, sleep duration and quality is rarely influenced by one factor alone. Many personal and environmental factors can contribute to this. Read more advice about methods that can help you, and your family, improve the quality of your sleep.

Links to the headlines

Using your phone before bed could disrupt your sleep by an hour, warns scientist. Daily Mirror, November 15 2015

Links to the science 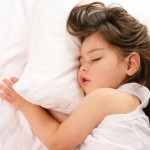 « Brad and Angelina’s Unconventional Parenting
How to Raise Intelligent Kids? »